Argonne continues to shine in its Diamond Anniversary year

Founded 75 years ago to harness the power of nuclear reactions for energy purposes, Argonne National Laboratory has grown into one of the US’ largest science laboratories, with partners in industry and academia continuing to tackle the challenges of energy storage.

On a warm, New York August day in 1942, a covert group of the US’ top scientists gathered; their secret mission was to create a nuclear weapon. Three years later, a mushroom cloud rose majestically from the barren plains of New Mexico. The Manhattan Project had detonated its first bomb— the rest of the project’s devastating history is well documented.

Less well known is the project’s investigation into plutonium. The work resulted in the world’s first nuclear reactor: Chicago Pile-1, built in 1942 underneath the University of Chicago’s Stagg football-field stands. It was from this research that Argonne National Laboratory traces its birth.

The organisation’s title comes from the name of the forest surrounding its first base in Palos Hills, Illinois, where operations to deliver a controlled, self-sustaining nuclear reaction were moved when deemed too dangerous to conduct in a major city. 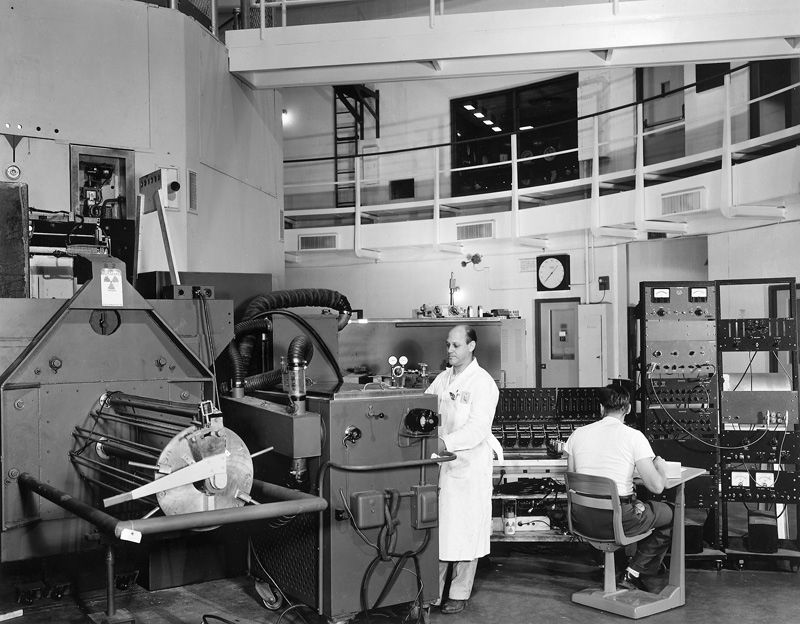 On 1 July, 1946, the laboratory was formally chartered as Argonne National Laboratory to conduct ‘cooperative research in nucleonics,’ making it the country’s first national laboratory. The initial charge was to find peacetime uses for atomic energy.

At the request of the U.S. Atomic Energy Commission— known now as the U.S. Department of Energy— Argonne began developing nuclear reactors. In the late 1940s and early 1950s, the laboratory moved to Lemont, Illinois, where it remains to this day. In 1951, a nondescript string of four light bulbs were lit by nuclear-generated electricity for the first time in our history.

Not all nuclear technology went into developing reactors, however. While designing a scanner for reactor fuel elements in 1957, Argonne physicist William Nelson Beck put his own arm inside the scanner and obtained one of the first ultrasound images of the human body.

In 1967, a technique developed by scientists at Argonne analysed the moon’s surface using alpha radiation from aboard the fifth lunar lander Surveyor 5, and later analysed lunar samples from the Apollo 11 mission.

Art of the possible

In the 1960s, Argonne’s expertise on nuclear energy and molten salts paved the way for exploratory work on lithium-sulfur and lithium phosphorous cells. The organisation’s reputation as a battery pioneer had begun. 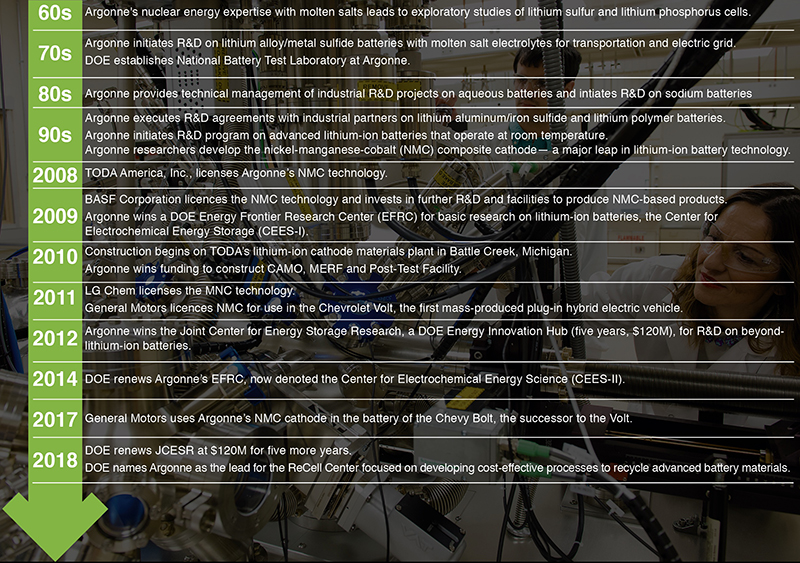 The research in the 1990s led to the nickel-manganese-cobalt (NMC) composite cathode, developed by Michael Thackeray and Chris Johnson; a chemistry that lasted longer and stored more energy than other battery materials at the time.

The NCM cathode has been widely used in electric vehicles, and by 2019 it made up 69% of the entire lithium-ion battery production capacity, according to Bloomberg New Energy Finance.

“It’s been a fantastic gift. Many of the things we’re seeing today in the electric vehicle world and the stationary energy storage world, when it comes to lithium-ion batteries, came from that invention,” says Srinivasan.

“I view that as a very important marker for Argonne. I think NMC was important because it sort of showed the art of the possible.

“It showed us that our scientists and our lab could have a tremendous impact in influencing industry to go in certain directions. So this idea that national labs can have a big impact in the world is, I think, embodied in the NMC story.” 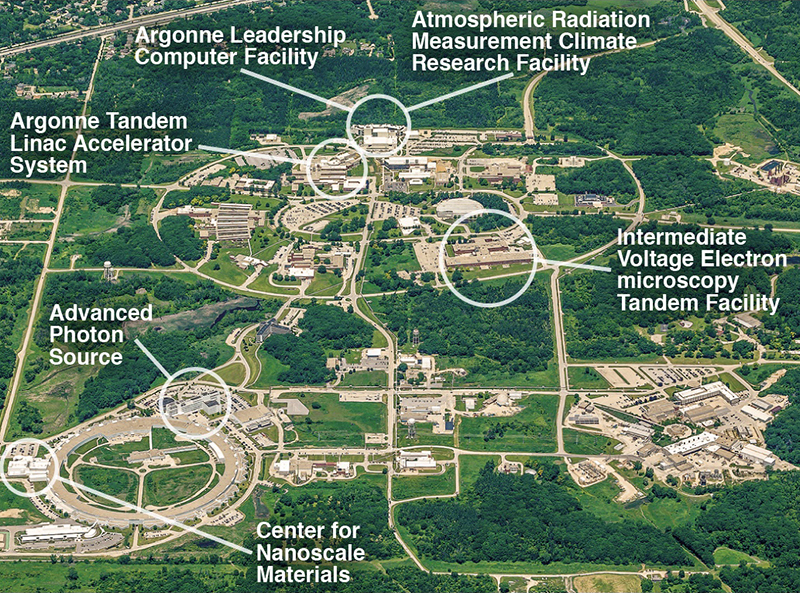 Venkat believes that national laboratories are important because they are ultimately an “assembly of really serious minds”, where world-class people have access to world class equipment.

For example, JCSER has synchrotron sources that even large companies cannot afford on their own.

“So it’s great people doing great R&D, which then leads to a lot of new discoveries,” says Venkat.

“But an important part is you have to do something with those discoveries, the R&D and intellectual property; meaning, you have to work with industry and you have to get the knowledge and IP out of the door.

“And I think that’s really what the NMC patent taught us— that you can do great R&D in the lab if you pull teams together. You can really have an impact when you start to use the facilities of the labs and move things fast towards market.

“And ultimately, if you work with companies, you will have a tremendous impact on the overall market. NMC is one of many inventions at Argonne and it is, I think, a great story of the art of the possible.”

The early part of the 21st century saw Argonne’s primary mission transition away from nuclear energy and diversify into a broader range of energy types and storage.

The following year, Argonne developed another national user facility, the Argonne Leadership Computing Facility (ALCF). At the ALCF, scientists have used several generations of supercomputers to carry out modelling and simulation experiments of materials.

In 2012, the U.S. Department of Energy chose Argonne to lead the Joint Center for Energy Storage Research (JCESR), a DOE Innovation Hub that is led by Argonne.

Argonne’s battery program has been strong for decades, but received a big shot in the arm from JCESR. Its initial five-year mission was to reduce the cost, increase the energy density, increase the lifetime, and increase the safety of electric vehicle and grid storage batteries.

JCESR was renewed in 2017 for another five years with a new mission to improve the affordability of batteries both for transportation and for the electric grid.

Read the first part of a two-part interview with Venkat Srinivasan here: