Catalysts save US taxpayer millions

The vent cap catalyst developed by Philadelphia Scientific several years ago is proving its worth, extending the lives of telecom standby batteries and saving the US taxpayer money in the process, explains Harold Vanasse, Vice-President of Sales and Marketing with the company.

The U.S. Air Force is extending the life of its telecommunications backup power batteries – and saving millions of dollars in the process – by employing a proven, inexpensive technology.

The solution is the addition of a small catalyst device to each VRLA (Valve Regulated Lead Acid) battery cell. This device is housed in a cell replacement vent cap. You snap out the old cap and snap in the new.

The original lead-acid batteries are called wet cells or flooded cells. The plates of a wet cell sit in a “jar” of electrolyte (dilute sulfuric acid). Wet cells, in essence, are open to the atmosphere and vent both hydrogen and oxygen, making it necessary to periodically add water. The venting of hydrogen and oxygen make it very important that battery rooms be well ventilated. These wet cells really did last about 20 years without losing significant capacity. But these batteries had three major drawbacks:

1. Maintenance costs with wet cells can be high because you must add water to them periodically.

3. Wet cells take up a lot of room relative to the amount of energy that they store.

VRLA batteries were developed in the early 1980s and were designed to correct all the problems of flooded technology. Most of the gas produced inside the cell was intended to recombine back into water on the negative plate in a very efficient oxygen cycle. In an ideal world there would be no negative plate self discharge, no positive plate corrosion and no excess charge current needed. Batteries would last for 20 years and little gas would be released from the cell.

But by the late 1980s, reports abounded that VRLA batteries were losing capacity.

In the real world, chemistry dictates that negative plates do self-discharge and they do this more when impurities are present in higher quantities. In our experience the typical high-quality, long-life (20 year) VRLA cell has a self-discharge rate equivalent to 80 ml of hydrogen gas per day per 100 Ah. Oxygen, produced from a variety of processes on the positive plate, will recombine with this hydrogen on the negative plate and cause it to depolarize.

In the real world positive grids also corrode. When a positive grid corrodes at a relatively high rate, it absorbs the oxygen produced as the lead grid turns into lead dioxide, leaving no oxygen to depolarize the negative plate. 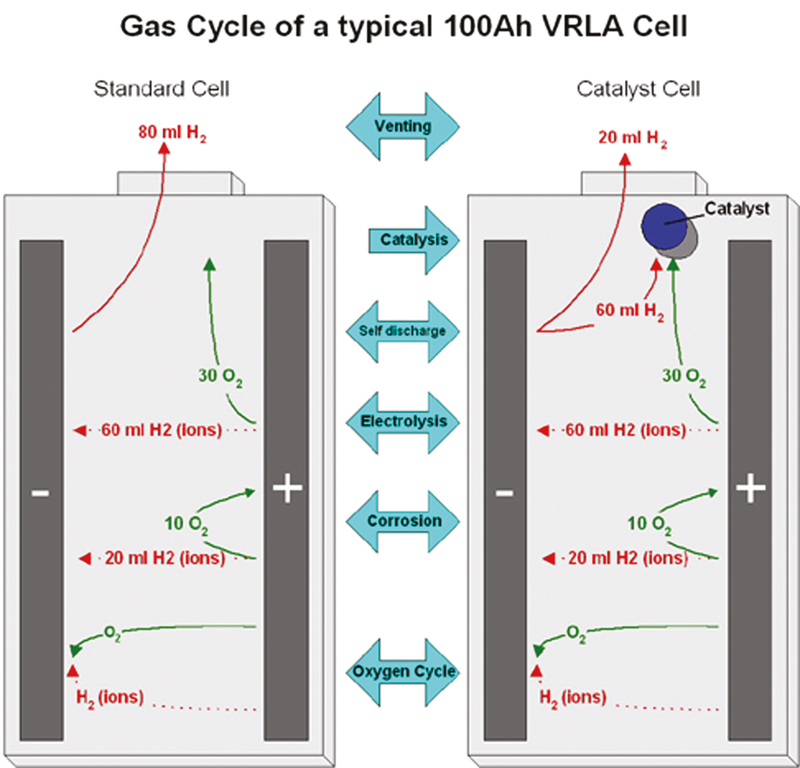 In this case, the negative plate stays polarized and all the hydrogen will vent. Unfortunately, a positive grid that corrodes at the required rate will last much less than 20 years. Designers have done what is typically done on flooded designs for long life and reduced the corrosion rate of the positive grid.

Typical state of the art designs will only absorb 10ml of oxygen on the positive plate instead of the 40ml needed to counteract the hydrogen generated on the negative. This is the paradox of VRLA design. A ‘better’ positive grid can actually impair the life of the design.

This leaves an unbalanced situation with a strongly depolarized negative plate. The charging system will compensate with more current which will lead to excessively high polarization on the positive plate and damaging effects on the cell due to the excess current. Electrolysis will generate high amounts of gas, leading to water loss.

The dilemma for the battery designer is in achieving perfect balance in the cell. If the positive plate corrosion rate doesn’t correspond exactly to the self-discharge rate of the negative, then negative plate depolarization becomes an issue.

According to Don Larson, telecommunications engineer with Hill Air Force Base near Ogden, Utah, the VRLA batteries that the Air Force uses for its telephone switches are VRLA AGM (Valve Regulated Lead Acid Absorbent Glass Mat) batteries. “VRLA cells were initially marketed as ‘maintenance free’ batteries,” said Larson. “But it has been common knowledge for years in the world of telecommunication batteries that VRLA batteries do not last as long as they should. The VRLA batteries used by the military and telephone companies as emergency power backup for telephone switches are sold as 20-year batteries, but have really been lasting between three and seven years. By IEEE (Institute of Electrical and Electronics Engineers, Inc.) standards, a battery is considered failed when its capacity has diminished to 80% of what it was when new.”

While researching possible alternatives to the Air Force’s batteries and possible better ways to test batteries, Larson came across reports on the efforts of my company, Philadelphia Scientific in Montgomeryville, PA., to correct the chemistry of VRLA cells and prevent dry-out by introduction of a small catalyst device into each cell.

The catalyst promotes the recombination of oxygen and hydrogen in the cell. The catalyst material is introduced into the cell as part of a replacement vent cap.

Philadelphia Scientific, according to Larson, “had performed some very convincing tests over several years.” We had placed two sets of VRLA AGM cells on float (trickle) charge in a 90˚F water bath. The temperature elevation makes for an accelerated life test – one year at 90 degrees equals approximately two years at normal (about 72˚F) temperature. One set of cells had the catalyst caps and the other set had standard (no catalyst) caps.

Larson also spoke with Peter DeMar, president of Battery Research and Testing (BR&T), a company headquartered in New York State. BR&T has had considerable experience and success in rejuvenating capacity-depleted VRLA batteries by adding water and installing the catalyst caps. DeMar supplied Larson with several reports on rejuvenations, including the following:

• A battery string was load tested and found to have 32% of design capacity.

• Catalyst caps were installed on all cells. This is an integral part of the IOVR process.

• A year later a load test showed that the battery string was at 92% of design capacity.

• Two years later – three years after the rejuvenation – another company did a load test on the same string and the capacity was still at about 92%.

Larson decided to have BR&T perform a test-rejuvenation on a nine-year-old string of batteries at MacDill Air Force Base in Tampa, Florida:

• The load test revealed that the battery string had 33% of the amp-hour capacity that it had when new.

• The rejuvenation, or IOVR process, was performed the same day following the load test. The IOVR process consists of the following steps:

1. Measure the impedance of all cells. (Impedance increases as cells dry out.)

2. Add distilled water to the cells in a quantity proportional to the cells’ impedances. These proportions have been determined by BR&T over years of testing.

• BR&T also pressure tests each cell and does a high-impedance test to determine if there are sneak-path current leaks.

• A follow-up load test was performed two weeks later. This test revealed that the battery string was at 71% of design capacity. (Experience and theory indicate that the capacity of rejuvenated batteries will continue to rise for up to nine months. This is because the catalyst causes gradual re-polarization of the negative plates – a good thing).

Larson expects that the capacity of this battery string now is at least 80% of design capacity and it should remain at close to that capacity for many years.