Better known as the Cherry Hill Conference (even though it’s no longer held there) the US Power Sources conference, dealing with portable power for the military, continues to be the leading edge event if you’re looking for a solution where costs aren’t a major constraint. But this year, the 43rd Power Sources meeting looked like a major lithium ion conference. The Editor reports.

It doesn’t take long to work out which technologies are on the rise: You just count the number of papers (or even sessions) that the mainstream conferences are devoting to them. Five years ago, the US Power Sources meeting was dominated by fuel cell papers. This year, there were eight session dedicated to secondary lithium ion and if you take into account materials development and safety issues, there was much more- lithium has almost become the chemistry discussed almosy to the exclusion of all else and perhaps that’s no surprise.

Secondary lithium is now well established from everything to space exploration ( Mars Rovers) to soldier based systems. The energy density factor is crucial. But the military are not ignoring the safety issues surrounding lithium ion technologies, which frankly has not been discussed that much at any of the meetings this year where lithium has featured and with increasing pressure to use commercially available technologies, more attention has been paid to the reliability and performance of the safety devices currently found on commercially available cells.

There are two such mechanisms available in commercial 18650 cells- the PTC ( positive temperature coefficient mechanism), which under external short circuit or high temperature conditions increases its resistance, thus reducing the current a cell can deliver. The other device, known as the current interrupt device (CID), is essentially a pressure valve that opens up, when raised intra cell temperature causes the cell electrolyte to reach a gaseous phase. The opening of the CID causes the cell to go open circuit and thus limit the risk of fire due to electrical heating,

Analysis of test data showed that there were two major causes for the thermal runaway were overvoltage and external short conditions. The issue was that the internal protective devices were either not protecting the cells as expected or were themselvesbeing a cause for the hazards encountered. The problem appeared to be centred on the PTC device itself so the Nasa team initiated a new study to understand the causes for the thermal runaway in high-voltage and high capacity battery modules and to determine the limitations of thecell internal protective devices.

Several types of tests were carried out as part of the study to understand the failure causes and mechanisms in multi-cell series (string) or parallel (bank) modules.

The tests were performed with Sony 18650 cells of 1.5Ah capacity obtained direct from the manufacturer. Cells were tested as single cells, banks of four cells and banks of 16cells. For these combinations, the limits were varied to determine the tolerance and limitations of the protective devices. 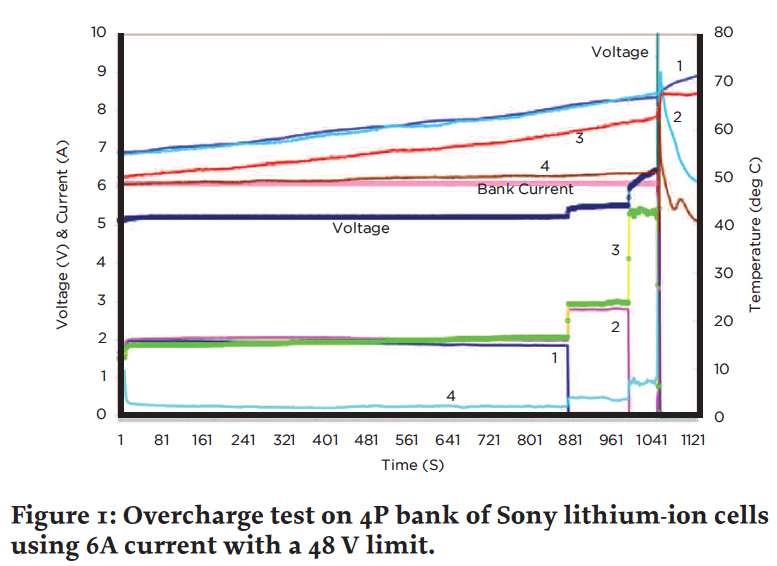 For all the samples tested, the single cell overcharge and external short tests had expected results with CID opening and PTC activation, respectively, occurring without any catastrophic failures. Problems occurred with parallel strings. The 4P overcharge test with 6A current (equivalent to 1C rate per cell) and 48 V limit, had the following results (Figure 1). The current on cell 4 dropped to approximately 200 mA at about 1 hour into the overcharge condition. Two minutes after this occurred, the CIDs tripped on cell 1, cell 2 and cell 3 sequentially. At this point, cell 4 was carrying all the current (6A) and being exposed to the 48 V limit on the power supply when explosive venting with flame and thermal runaway occurred. The cell can showed splitting (Figure 2). The maximum temperature recorded on this cell was only 51ºC just before the venting occurred. 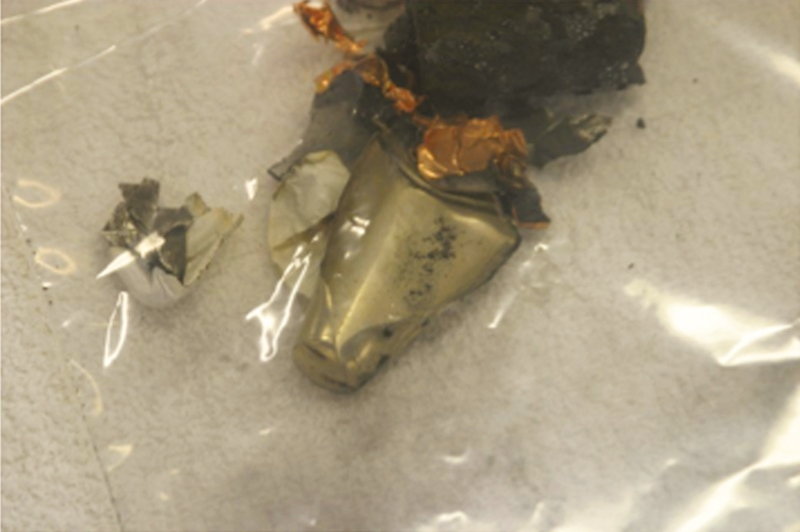 Jeevarajan says that the tests provided valuable information on the limitations of both the PTCs and CIDs internal to small cylindrical lithium-ion cells. Tripping cell PTCs irreversibly increases their electrical resistance by up to a factor of two. Compromised or high-resistance PTCs cause catastrophic failures under overcharge conditions. The CID did not protect or underwent incomplete opening and reset under overcharge conditions when the current and/or voltage limit values (48 V and 6 A for a bank of four cells or 24 A for a bank of 16 cells) cause uncontrollable heating or PTC ignition.

The PTC withstanding voltage and trip current should be determined for the cell to be used in the battery design, by test, as cells from different manufacturer will have different PTC ratings and this information is not provided in a cell specification. Cell screening for battery build for engineering, qualification as well as flight testing shouldnot cause inadvertent activation of the PTC. The CID activation and protection from overcharge catastrophies should be confirmed by test in the actual flight battery configuration, if the CID is used as a level of safety control. These tests should be run at the module size for which the CID is being used as a safety control.

The CID device came under further scrutiny by the same team from NASA as to whether the device can cause arching in certain situations, which could spark a fire if the electrolyte were venting.

Cell designs with the CID feature contain an additive that generates gas pressure when driven into overcharge. At a certain pressure, the CID expands and interrupts all external current flow to the cell. Thisis an irreversible feature that permanently open circuits the cell.

If higher pressures develop internally for other reasons, the cell rupture vent located on the CID plate will relieve cell pressure irreversibly. Two sets of CID overcharge tests were conducted, one with live cells and one with only the cell header assemblies. The live cell CID tests were conducted with the cell connectedin series with a power supply for achieving the desired compliance voltage (12 to 55V). The investigators looked for electrical evidence of arcing during the test and physical evidence after the test. The cell tests were conducted at NASA-JSC. The cell header CID test was done by Symmetry Resources using cell headers extracted from the disassembly of live cells. 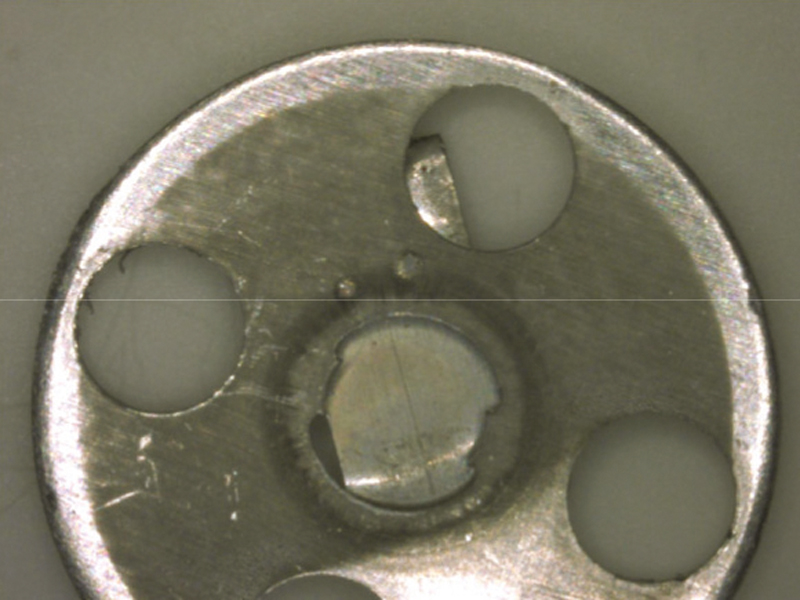 Comparison of the live cell overcharge tests with a Moli cell at 12V and 55V indicated significant electrolyte residue left on CID components tested at 55V as shown in Fig 3. 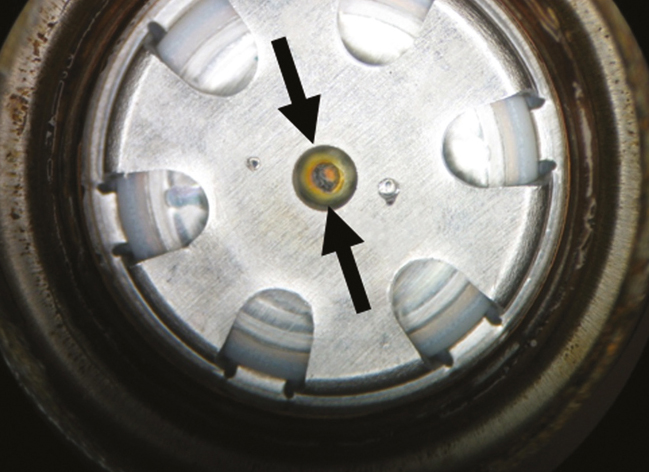 Confirmation runs by overcharging a Moli cell with P/S limit set at 55V yield different results. The CID did not ignite and cause thermal runaway. However, Electricaltransition of voltage and current occurred at 22V (like during cell header assembly test). However, transition afterwards was much slower and no clear evidence of arcing was found upon destructive physical analysis. The CID components were found to be wet with electrolyte and partially coated with electrolyte residue. Maybe the cell’s free electrolyte acted to suppress arcing.

CID arcing can be controlled with these cell designs by ensuring charger power supply voltage headroom is less than 55V when charging series strings. Headroom isdefined as the difference between the power supply voltage compliance limit of the charger and the minimum total voltage of the series strings of cells at the point where anyone of its cells is near CID activation.

A team from the US army research laboratory gave a very conservative paper on lithium ion safety, taking the view that safety issues are related to the charging process, especially of a fast charge or an overcharge process. The conditions inevitably result in the plating of lithium ion metal and the growth of lithium ion dendrites can theoretically penetrate the separator which would result in a short circuit- and the heat from the short circuit causes further damage to the separator.

The answer? A better separator Acoording to Sheng S Zhang and colleagues, multilayer structural thermal shutdown sperators show excellent protection for smallbatteries. But they don’t offer the same protection for larger sized batteries, especially in the case where the charging current rate is high. The reason is due to a delay in the heat generation and the polymer melting.

The US army laboratory team believes the best safety could come from employing a ceramic separators consisiting of naon sized ceramic poweders coated on to a non woven polymer with high porosity and high melting point such as Separion developed by Degussa.

But its high powered large format batteries that people want to use now- for everything from hybrid electric vehicles to military projects like “directed energy weapons”.

Here SAFT are unquestionably at the leading edge – but the company’s presentations don’t – perhaps not surprisingly tell us how they can achieve tremendous performances like the VHP range.

All cells in the portfolio are capable of at least 8kW/kg on 2-second pulses as well as 12kW/kg on millisecond long pulses. Specific energy of the VHP cells is around 70Wh/kg.

The latest generation SAFT’s Ultra high power cells as demonstrated by the VL5U range is capable of delivering over 12kW/kg of continuous power, over 20kW/kg of 2 second pulse power and approaching 30kW/kg of specific power for 200 msec long pulses which the company claims is the highest power electrochemical energy storage available in the world.

Of the more unusual lithium ion designs, one from Inventek is of note particularly in dealing with the issues of construction and safety. The Rolled-Ribbon™ design exhibits high thermalconductivity. The large button cell hardware acts as from the separator material, instead of through it. High power/low battery impedance yields low energy loss and low heat generation. As we’ve seen thermal issues can plague prismatic and cylindrical designs in high power applications. Elevated cell

temperatures cause accelerated aging and safety issues with some Li-ion chemistries. Tests show adequate heat dissipation with high power operation of the large format stacked cell battery such that active thermal management is generally not required. Batteries have been pulsed at up to 20ºC rate (10-s duration) and have shown only modest temperature rise. HPPC power pulses gave atemporary 2-3ºC rise and 6C-rate full discharge gave under a 10ºC rise. The temperature differential from centre to the edge of cell never exceeded more than 1ºC.

The disc-shaped cell enables a compact battery with improved internal heat dissipation. A stacked cell battery using rolled-Ribbon Li-ion cells overcomes limitations of high rate capability and capacity that are typical with spiral wound cells. This design for a cost-effective HEV battery also considers costs related to electrode materials, cell/battery hardware, cell fabrication, battery assembly, battery operation/control, and safety. The USA may be bowed financially but as the meeting shows, while its military and aerospace industry is supported innovation follows. The best powersource solutions are still likely to emanate from this continent.