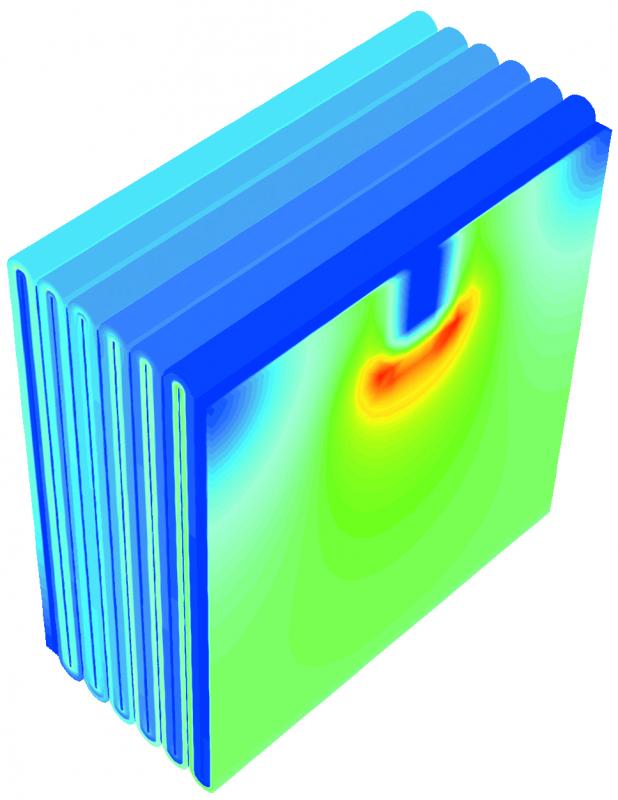 Large lithium-ion batteries appear to be the main contender as power sources for the EV and HEV market but proper thermal management is crucial to prevent overheating and uneven heating across a large battery pack, which can lead to degradation, mismatch in cell capacity and potentially thermal runaway. The design of the thermal management system requires knowledge about the cooling system as well as the amount of heat that will be generated by cells within the battery pack.

On battery cell level, the focus is on detailed heat generation and temperature distribution within a battery cell. This type of study is pursued mainly by battery manufacturers and battery researchers. Experimental data reveals that the rate of heat generation varied substantially with time over the course of charging and discharging. Heat can be generated from internal losses of Joule heating and local electrode overpotentials, the entropy of the cell reaction, heat of mixing, and side reactions.

If only the most important effects of Joule heating and local electrode overpotentials are considered, heat generation can be expressed by open circuit potential and potential difference between the positive and negative electrodes. Models based on this can be used to predict the potential and current density distribution on the electrodes of a lithium-ion battery as a function of discharge time.

Then, based on the results of the modelling of potential and current density distributions, the temperature distributions of the lithium-ion battery are calculated. 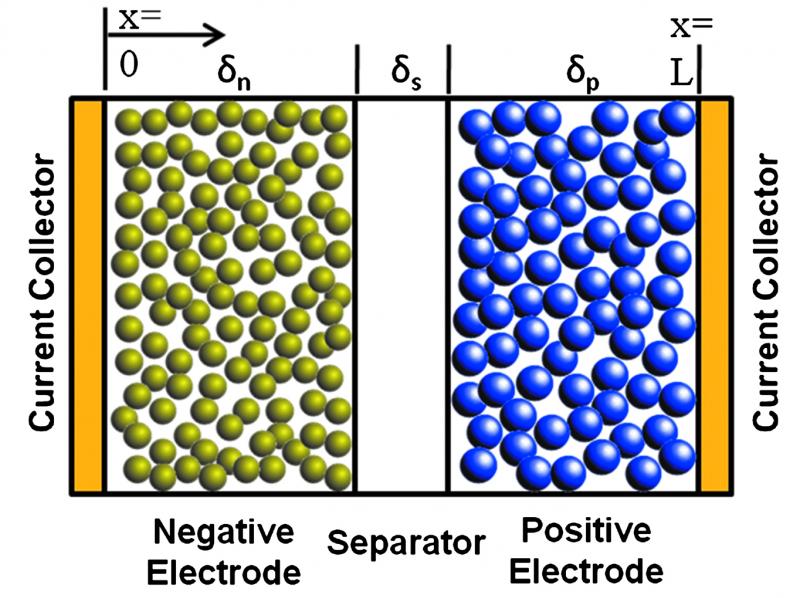 The results can then be used to examine the effect of the configuration of the electrodes such as the aspect ratio of the electrodes and the placing of current collecting tabs as well as the discharge rates on the thermal behaviour of the battery. Fig 1a and Fig 1b show typical results from such models generated in ANSYS® FLUENT®.

The temperature distributions from the modelling were shown to be in good agreement with those from the experimental measurement.While this type of model is simple to use and gives detailed information about temperature and current density distribution, it needs experimental testing data as input. Due to that, this type of model cannot predict the impact of design changes on the battery thermal performance without re-conducting the testing. 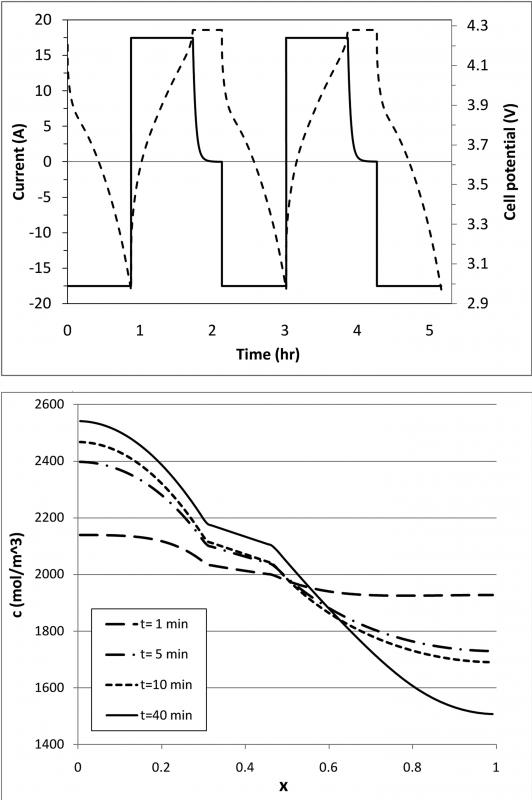 A Physics based electrochemistry model, on the other hand, can be used to investigate the impact of battery design parameters on battery performance, which includes the geometry parameters, properties, and most importantly temperature here. A Physics based model can also provide inputs that would otherwise need experimental testing to obtain.

The most famous physics based model was originally proposed by professor John Newman from UC Berkeley. Such a model has been implemented in Simplorer®.

One optimization problem that should suggest itself immediately when examining Fig 4 is the determination of the initial concentration of electrolyte in the cell. The concentration used in Fig 4 is presumably determined due to the conductivity maximum that occurs at approximately this concentration.

However, Fig 4 shows that the bulk of the composite cathode is at a significantly lower concentration, where the conductivity is also much lower as a result. This leads to severe transport limitations in the depth of the electrode. 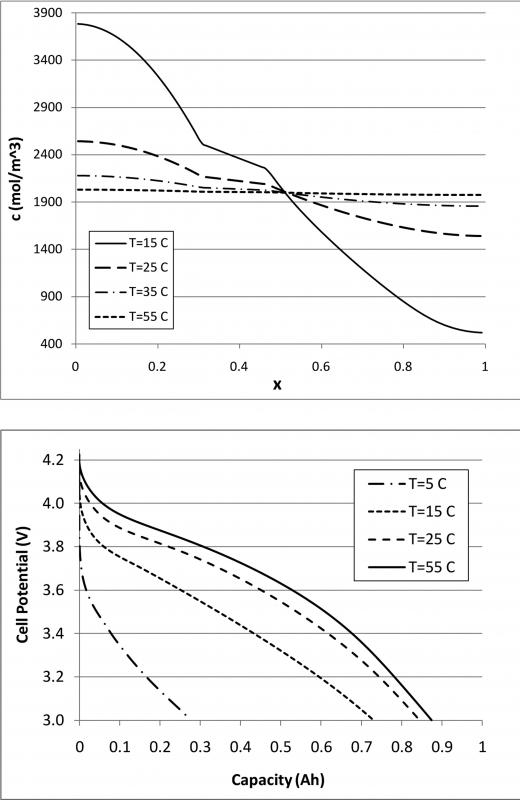 Another implication of Fig 5 is that battery run-time is a strong function of time, and battery life is longer with higher operating temperature. This is also confirmed in Fig 6 from physic based electrochemistry model.

For instance, Computational Fluid Dynamics (CFD) engineers working in battery thermal management are interested in maintaining the desired temperature range, reducing pressure drop, and maintaining temperature uniformity. And for them detailed heat generation mechanism and battery cell structure is not of prime interest. CFD has been widely used for predicting flow and heat transfer, and thus battery thermal management CFD simulation is just another application. 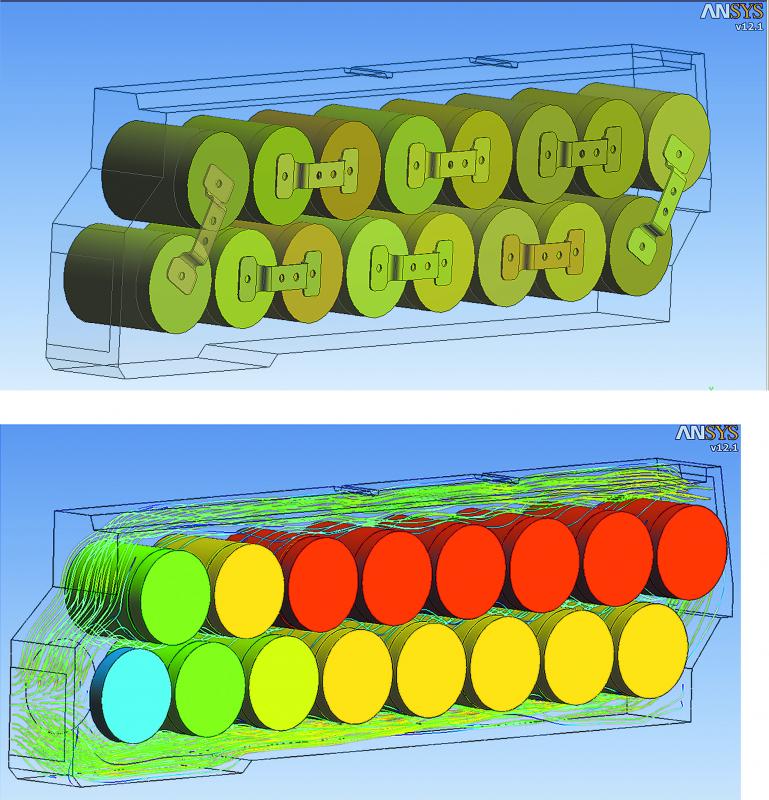 As a leading CFD provider, ANSYS has been putting in effort to make the process easy for the user. Rather than having to use different tools for geometry, meshing, post-processing, and optimization, which are all integrated components of a CFD analysis, ANSYS® Workbench™ makes all the aspects of the simulation under one umbrella.

Geometries built within workbench tools or imported from other CAD packages are all parameterised. An update of results, due to change of geometric parameters, takes one button click.

With the help of ANSYS Workbench, a complete battery thermal CFD analysis, including optimisation, can be done entirely within ANSYS Workbench environment. Fig 7 and Fig 8 show such a CFD example performed by a major automotive OEM using ANSYS Workbench tools.

While CFD can give detailed thermal information about battery thermal management system, it is time consuming to perform many transient simulations under different drive cycles. Model order reduction technique exist to extract a model from CFD results, and the extract model, called Foster network model, gives the same solution as that from the full CFD model but it runs much faster compared with CFD. 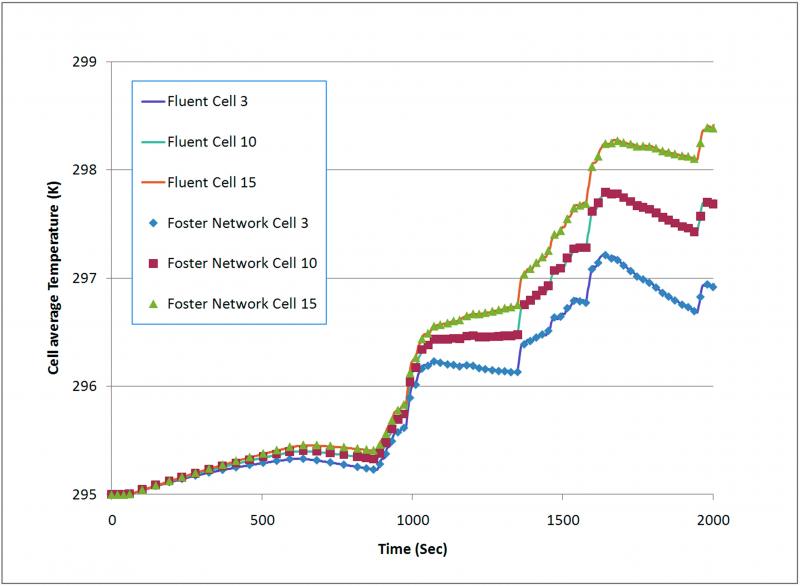 For the model shown in Fig 7 and 8, it takes a couple of hours to simulate one drive cycle under one single CPU. But for the extracted Foster network model, the simulation time is reduced to approximately 20 seconds, a time reduction of more than two orders of magnitude. And yet, the Foster network model gives the same results as the original full CFD model. Fig 9 shows such a comparison.

The model order reduction process is handled automatically by ANSYS Simplorer, which uses CFD results as inputs. This model order reduction technology opens the door for simulations that would otherwise have been just impractical. For instance, battery thermal control system analysis would benefit from such a fast model.

For electrical engineers, their primary concern is the electric performance of the battery rather than the thermal performance.

However, as mentioned before, battery electrical performance is a strong function of temperature. So, electrical engineers need an accurate and yet simple to use thermal model that couples with their battery electric circuit model. Fig 10 shows such a complete dynamic model. 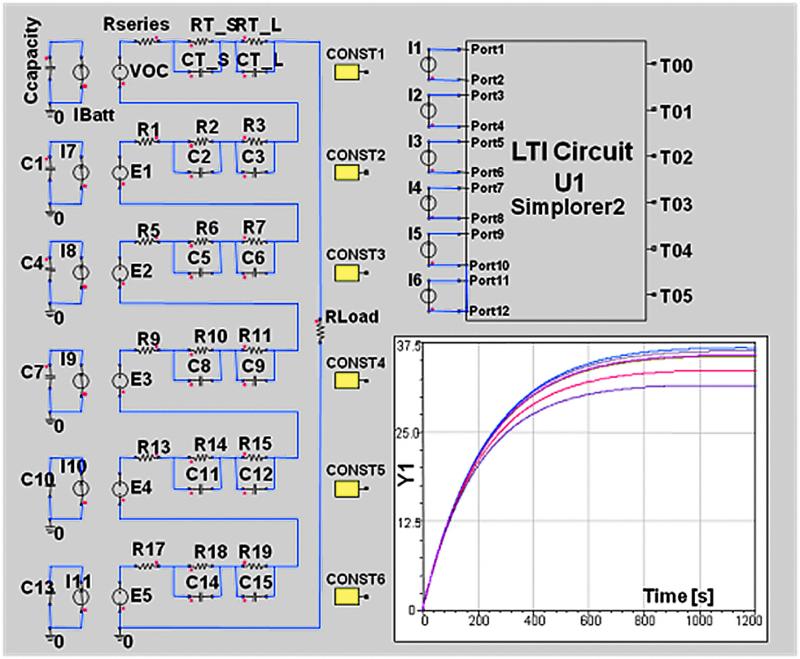 With the help of VHDL-AMS, which is an IEEE standard hardware simulation language supported by Simplorer, a traditional thermal network model can be generated easily. As a matter of fact, VHDL-AMS can be used for much more complex multiphysics and multi-domain problems, and the John Newman electrochemistry model mentioned above was generated using VHDL-AMS in Simplorer.