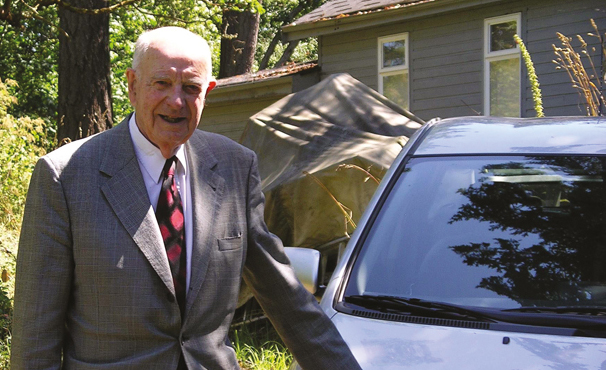 Can magnetic forces improve battery performance? According to Professor Robert O’Brien they certainly can!

Several papers have been published in refereed journals by academics (including myself), notably Professor Tom Fahidy of the Chemical Engineering Department of Waterloo University, Canada, in which magnetising a battery’s electrodes or current collectors has been shown to increase conductivity. This translates directly into battery performance—if the battery does not conduct electrolytic currents easily then it is useless, because you then cannot discharge it (or charge it, assuming it was built as a rechargeable battery).

If we define battery performance as energy returned by a battery divided by energy supplied times 100 to obtain a percent efficiency, then recent practice has been to increase the energy density and ignore the increasing resistance to charge and discharge – thus lowering the efficiency. At some point this must reduce the number of miles travelled per gallon, or increase the number of litres per 100km, that a hybrid gasoline-battery automobile may travel. So it would seem that some thought and effort should be given to this trend – or problem-to-be) because it affects all hybrid vehicles, whether gasoline-battery, fuel cell-battery, or pure battery driven.

Fortunately there is a simple system which simply makes better use of the earth’s gravity field, which we all feel, holding us to the surface of the earth. The explanation is in that small electrode. Let us say that an ion is being removed at an electrode and, for convenience, say this is the cathode, as it usually is. In the earth’s gravity field an up-welling will occur, especially very near the electrode, as diffusion and migration of ions to the cathode produce a density difference resulting in the diffusion layer right against the electrode, which is partially swept away by natural convection if the electrode is anything but perfectly horizontal – a vertical up-welling supplying extra ions to receive or deposit charge, and so allow more power to be drawn from the battery.

Clearly one would like to increase the rate of transport of the ions involved if possible. All three methods of transport in electrolyte conductance can be increased, but this is difficult to achieve for diffusion and migration without other detrimental effects. Convection however is by far the most potent transport mechanism on earth, and fortunately this is easily enhanced.

In the past several methods have been used to some effect, but the best results were achieved with mechanical pumping of the electrolyte past the electrodes. In a small battery, say size AA, this is impossible. Another system included injection of small, rapidly rising bubbles – again impossible in an AA battery. But if the electrode or the current collector is para-magnetic (Fe, Ni or Co are the common ones) it can be magnetised. If it is magnetised so that it is plane polar – that is, the north and south poles are on either side of the electrode, and the opposite magnetised electrode has its opposite pole to the electrolyte, that is north pole opposite south pole to produce a plane polar field in the electrolyte – convection is very much enhanced.

The actual mechanism can be understood in the same way that the direction of rotation of an electric motor is determined, that is by the right hand rule. In this rule, the thumb is used to indicate the current and this in a battery is the rise of the electroactive ion past the surface of the cathode (following our convention outlined above). The field is now at right angles to this flow and is represented by the index finger pointing across the electrolyte in the cell to the anode, and the force to move electrolyte or turn an electric motor is again perpendicular and indicated by the middle finger and across the face of the electrode.

Combining these forces vectorially, an upwardly moving helix results which sweeps away the diffusion layer and delivers the electroactive ion rapidly to the cathode. Similarly the anode helix will be downward, sweeping away the diffusion layer there as well and giving a more rapid supply of electroactive ions to the cathode, lowering the resistance to both charging and discharging.

It was observed to just do this in a laser interferometer in an academic study, but how does it turn out in a usefully sized battery? The following results were obtained in Varta battery components destined to be part of a NiMH traction battery for hybrid automobiles. The procedure was to have the manufacturer inject a small amount of gadolinium sulphate solution into their as-manufactured batteries, so that a paramagnetic, indifferent ion could further enhance convection. The batteries were sent to a battery testing firm unmagnetised and tested, then they were returned and passed through the magnetising machine and re-tested by the same company. Both tests were at 100 amperes.

The total amount of extra electrolyte added by the manufacturer was zero, as some was removed before the gadolinium ion was added. The batteries were shipped ‘dry’, so that if drilled they would not drip. 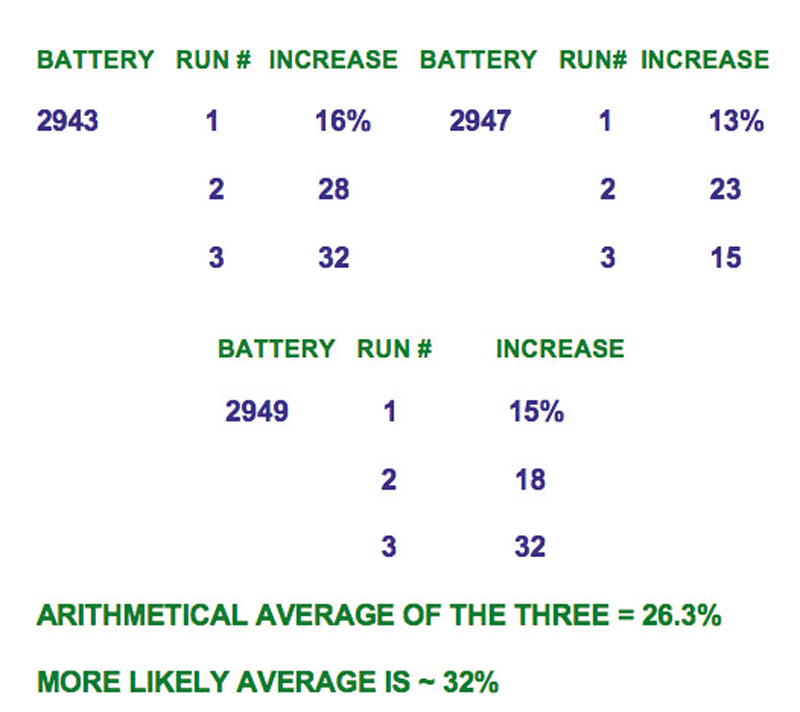 Table I shows the performance found by integrating under the curve. Concessions were made: when the 100 amperes could not be drawn from a non-magnetised battery and the magnetised battery continued to supply the 100 amps, only the time to the failure of the non-magnetised battery was used in the integration to get energy delivered. Another obvious effect is that although the third run of the battery in the non-magnetised state showed it failing badly in the third run, in the first recorded run in the magnetised state (in all batteries in all states the first run was not recorded and considered to be unreliable because the state of charge was not accurately known) the battery had recovered. 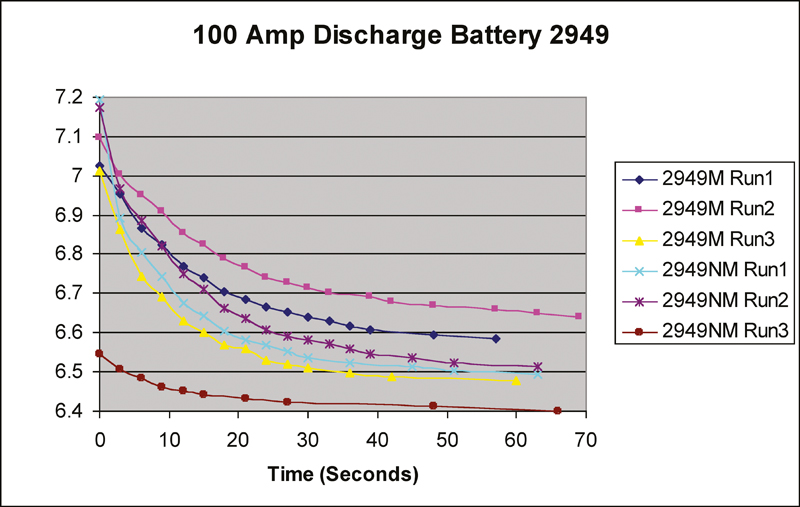 Individual runs are compared – run 1 non-magnetised to run 1 magnetised – and it is obvious that the concessions made for failure at early times have distorted the shown results for at least one battery, 2947, resulting in an anomalous result. The general behaviour always observed in the testing of which much has been done, the comparison, run by run has resulted in a constant increase in the performance of the magnetised battery in comparison with the non-magnetised.

The conclusion must be that, since the electrolyte resistance goes down as the current drawn goes up for batteries in the magnetised state, when for the non-magnetised ones the resistance goes up as the current drawn goes up, the results seen in the academic studies escalate perfectly well to the practical state, and that something can be done to increase the efficiency of batteries: that is, magnetise them even if a ferro-magnetic core must be added to the electrolyte or the current collector.

Battery capacity testing: what it is, how it works, and why you should be doing it