From here to eternity 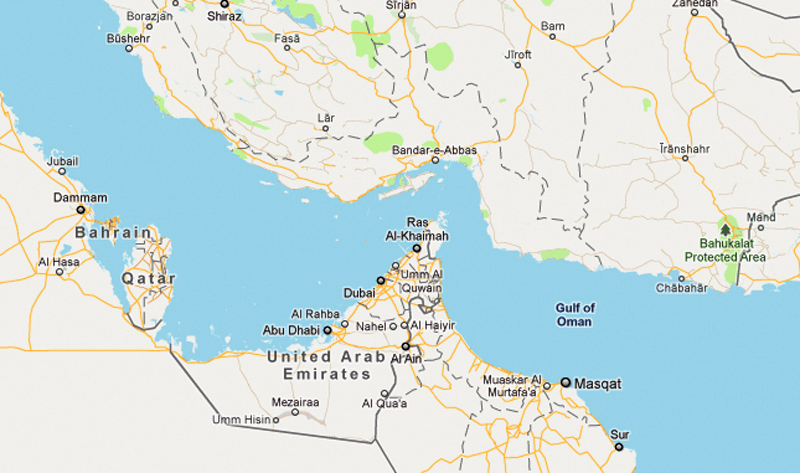 Gerry Woolf speaks with Mark Stevenson and the senior management team of the latest entrant to the Motive Power sector— Eternity Technologies.

It’s a miserable time in Europe in November. The clocks have been put back, the days are shorter, the economy is in a mess, the Euro is under threat. What better time for BEST to hop on a plane and fly to the new hub of the world, which has been growing rapidly and, at the time of our visit, was celebrating its 40th anniversary— the United Arab Emirates— then pay a visit to the new motive power battery of Eternity Technologies. 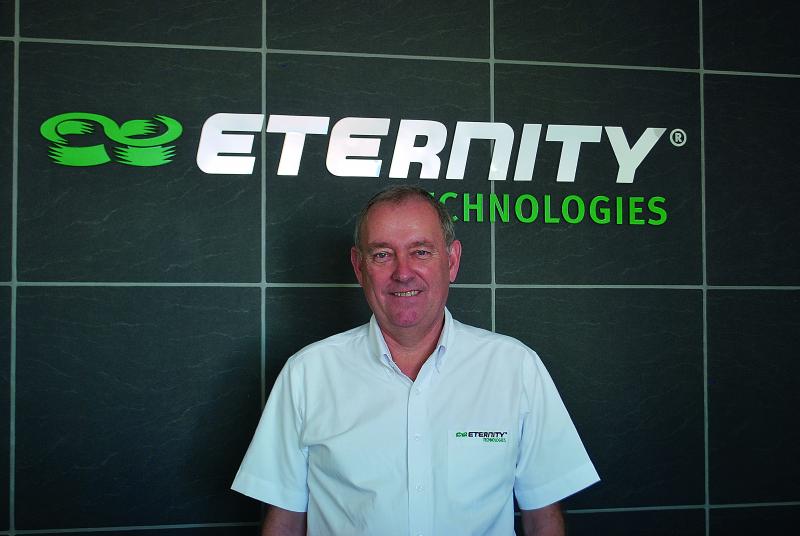 Dr Mark Stevenson, who has a lifetime’s experience in building and operating lead-acid battery plants gave a hint of what he might be doing in the future in the interview he gave me back in Spring 2007 BEST, after he left CMP in the UK (see BEST issue 16 page 79). As I entitled the piece then, the action is in traction and the profit is too.

Europe and the USA might be in trouble now but there are plenty of other parts of the world that are booming or at least growing in significant percentage terms— China, Latin America and the Middle East itself.

Retail growth in the countries is enormous— more warehousing, more retail units and more electric forklifts— and that means a rosy future for motive power batteries. But if you want to take the business that is out there, you need fast lead times, the best technology but the location is everything.

The competitive advantage of being based in the United Arab Emirates is apparent when you look at the route maps of Emirates Airlines— you can ship to the markets of South Asia with ease— Dubai is closer to the region than Frankfurt, and being four hours ahead in time of Europe, shipping costs are going to be lower by as much as 3-4% and labour costs are also lower. And there’s a good source of local lead— with temperatures over 40ºC in the summer, automotive batteries don’t last long here even in the luxury cars that are the norm on the streets. 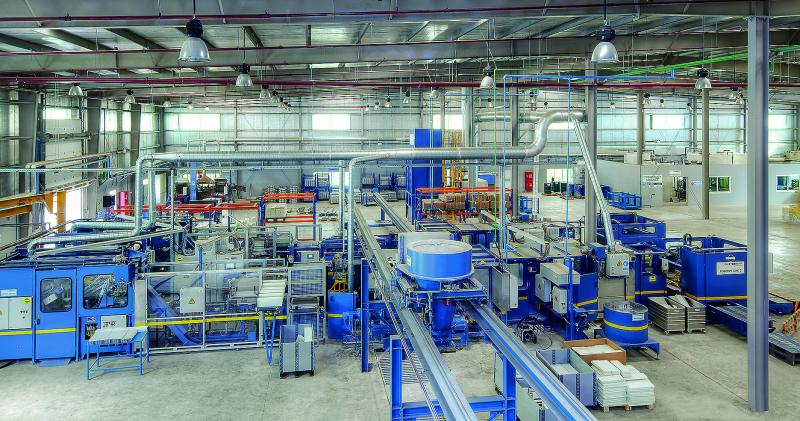 Now simply build the best possible battery factory you can with a top notch sales team and you should start to rake in the orders. That’s the path a team of private U.A.E. investors decided to take and entrusted Mark Stevenson to create the factory and appointed Richard Conlon as Director of Sales.

Stevenson has been given a considerable budget to create the dream factory which will ramp up over the next three years to produce 350 000 2 volt tubular cells this year to 1 million by 2013 and be able to fulfil orders in just two days.

How has the money been spent?

The plant itself has been located at Ras Al Khamiah, about an hour’s drive from Dubai, in a pupose built facility.

One building is dedicated to plate making, the other is focused on assembly. The plant has been carefully arranged for expansion— not all the money has been spent and the spaces for the machines which will take production beyond 1 million cells are evident.

The production equipment list is a validation of the best technology European battery machine makers can supply.

The Oxide mill is Sovema, while pride of place in mixing comes from Eirich (in fact the mixer which appears in the company’s advertisement on page 53 is the very same machine installed at Eternity’s plant). And when it comes to building tubular plates, there’s only one name— Hadi— to consider.

Their equipment at Eternity consists of two lines for automated tubular plate forming and filling, while the negative plates are cast on Sovema machines. There’s enough room in the plant to double this number of machines. The cast –on line for the majority of cells made is by Hadi again, while there are the typical manual jigs for welding the unusual sized cells.

On the materials side, Battery boxes come in from Italy — Plastam, while Daramic in France is the source of the separator. And the labour force, as in so many factory operations in the UAE, is wholly South Asian, with living accommodation close to the plant itself.

Curing plates is carried out in two Sovema– made chambers and it looked like there was room for at least a couple more, although Stevenson nonchalantly remarked that the summer conditions— more than half the year— high humidity and high temperatures, meant you could do a lot of curing outdoors.

But what really adds to the efficiency of this operation, and gives the sales team such excellent lead times, are the six Inbatec pumped formation modules, which shave days and dollars off of this process. There’s room and plans for a lot more of this game changing technology. Stevenson believes this is one of the best investments any existing motive power battery maker can make but sadly there’s nowhere to use the waste heat.When it comes to test and measurement, the plant is not found wanting — the best wet chemistry lab is in place together with inductively coupled spectrometry, so Eternity can check out the specification of supplied materials. 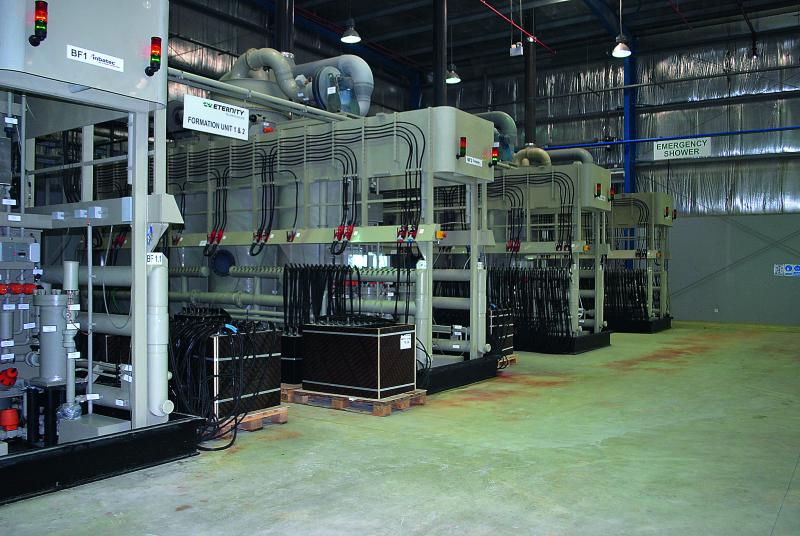 Were there any special issues that operating a lead-acid battery plant in such a harsh climate brought about? Only having to deal with a hot cold water supply, which created problems for the reverse osmosis units, but adding the necessary chilling was no big deal.

Its all been achieved in a remarkably short time scale, with machine installation commencing at the start of 2011 and start up production having begun in August.

As well as supplying excellent cells for motive power, Eternity is also promoting and selling the latest technologies for the best operation of motive power batteries —notably from Philadelphia Scientific including the company’s IBOS— intelligent battery organisation system, which ensures only the most appropriately charged and cooled battery is selected for swap over on trucks and “smart blinky” the smart tool which tells battery operators what cells are in need of topping up. Together with training and on going maintenance programmes, Eternity is in the right place at the right time and with the right technologies to serve markets that are far from in the doldrums.

A brief introduction to the UAE

Small, warm and perfectly formed, if you want the lowdown on the U.A.E., the US Department of State provides a nice potted account on its web site— 30 000 sq. miles and ‘about the size of Maine’. The population is about 8.9 million but slightly less than 1 million are ‘locals’. There are no political parties and the Government consists of a seven member supreme council of rulers made up of the hereditary rulers of each emirate.

Prior to the first exports of oil in 1962, the U.A.E. economy was dominated by pearl production, fishing, agriculture, and herding. Since the rise of oil prices in 1973, however, petroleum has dominated the economy, accounting for most of its export earnings and providing significant opportunities for investment. The U.A.E. has huge proven oil reserves, estimated at 97.8 billion barrels in 2011, with gas reserves estimated at 214.2 trillion cubic feet; at present production rates, these supplies would last well over 150 years. In 2009, the U.A.E. produced about 2.41 million barrels of oil per day.

Major increases in imports have occurred in manufactured goods, machinery, and transportation equipment, which together have accounted for 70% of total imports. Another important foreign exchange earner, the Abu Dhabi Investment Authority— which controls the investments of Abu Dhabi, the wealthiest emirate— manages an estimated US$600 billion in overseas investments.

More than 6 000 companies from more than 120 countries operate at the Jebel Ali complex in Dubai, which includes a deep-water port and a free trade zone for manufacturing and distribution in which all goods for re-export or trans‑shipment enjoy a 100% duty exemption. A major power plant with associated water desalination units, an aluminum smelter, and a steel fabrication unit are prominent facilities near the complex.
Except in the free trade zone, the U.A.E. requires at least 51% local citizen ownership in all businesses operating in the country as part of its attempt to place Emiratis in leadership positions. There’s zero taxation for overseas companies and ex‑pats.