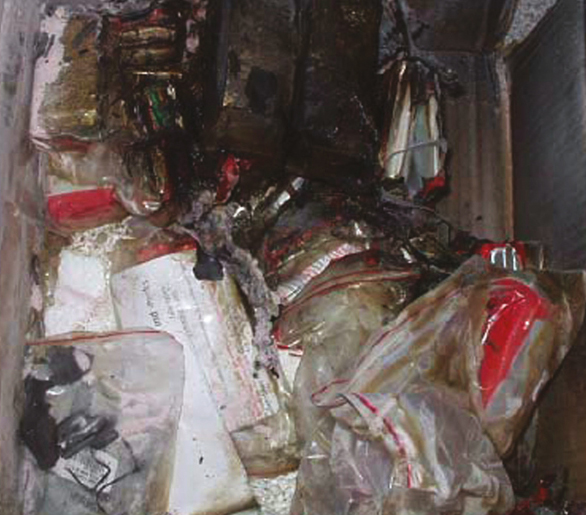 Extended battery runtimes have long been the wish of many consumers. Battery manufacturers have responded by packing more active material into cells and making the electrodes and separator thinner. These changes enabled a doubling of energy density since the lithium-ion battery was introduced in 1991.

But high energy density comes at a price: the denser the cells become, the more critical become the manufacturing methods. With a separator thickness of only 20–25µm, any small intrusion of metallic dust particles can have devastating consequences. Sony, the maker of the lithium-ion cells which are being recalled, says that on rare occasions microscopic metal particles may come into contact with other parts of the structure, leading to a short circuit within the cell.

Sanyo is the biggest manufacturer of lithium-ion, producing 42 million cells per month. Sony comes second with monthly production of 27 million and Samsung is a close third at 26 million.

lithium-ion batteries are nearing their theoretical energy density limit, and manufacturers are beginning to focus instead on improving manufacturing methods in order to increase safety. David Perlmutter, Senior Vice President and General Manager of Intel’s Mobility Group, says: “Right now, the industry is working primarily on improving the manufacturing and reliability of traditional lithium-ion batteries.”

The recall is unfortunate. It’s a huge task that will have a long-term ripple effect. Economists predict a setback in form of shipping delays and higher battery prices. Recycling 10 million lithium-ion packs is no easy task; roughly 70 million cells in these faulty packs will need to be replaced.

Battery users will ask: “Are there alternatives to lithium-ion that are safer?” Yes, there are newcomers; but experts and industry analysts tell consumers that the cobalt-based lithium-ion batteries powering our laptops and cell phones isn’t likely to be replaced soon.

The newcomers are the manganese and phosphate lithium-ion. In terms of thermal stability, these two candidates are superior to cobalt. The cobalt-based cell becomes thermally unstable at 150°C (302ºF), a condition that can lead to a thermal runaway in which flaming gases are vented. In comparison, manganese and phosphate cells can sustain temperatures of up to 250ºC (482ºF) before becoming unstable.

The manganese system, also know as spinel, has been around since 1996. Low internal resistance and high current loading make these batteries ideal for power tools. The phosphate-based chemistries by Valence Technologies and A123Systems go head-to-head with spinel. They differ from lithium-ion in having a nominal voltage of 3.3V instead of the customary 3.6V. 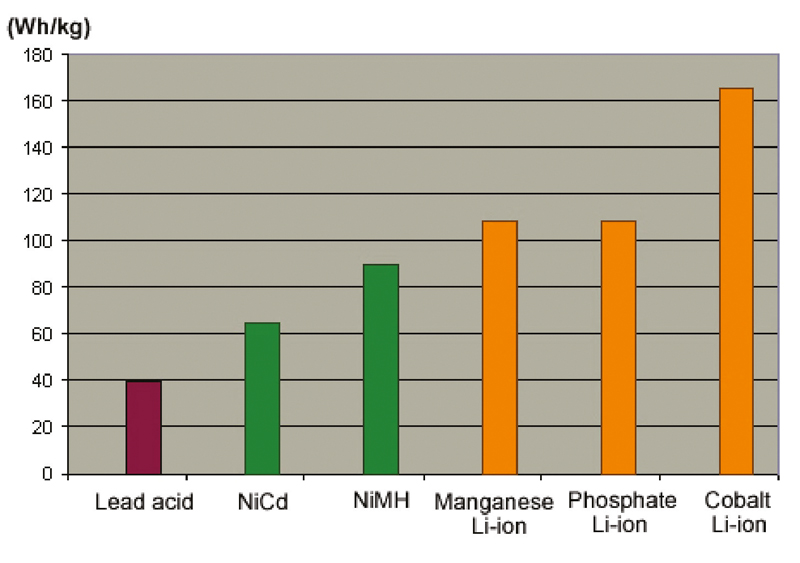 Although superior in safety and capable of delivering higher load current, manganese and phosphate systems have one major drawback against cobalt: lower energy density. Figure 1 compares the densities of lead-acid, nickel-cadmium and nickel metal hydride next to the three lithium-ion chemistries. One can see the soaring energy density of cobalt over the competitors.

Over the years fuel cell technology has seen much hype, and many see this power source as the way forwards. The fuel cell is not new; Sir William Grove built the first in 1839. Although invented before the internal combustion engine, the fuel cell remained a scientific oddity until the 1950s when this power source was used for the first time in US space and military programmes.

In the 1980s the fuel cell had a renaissance when scientists and stock promoters envisioned a world powered by this clean power source, fed by an inexhaustible fuel, hydrogen. They forecast that cars would be run by fuel cells and households powered by electricity generated from back-yard units. High manufacturing costs and short service life, however, have stood in the way of making turning these dreams into reality.

The fuel cell uses hydrogen and oxygen as fuel. Combining the two gases generates electricity and water. There is no combustion, and no pollution. The by-product is pure water. The system runs so clean that Ballard, a developer of fuel cell stacks, once offered guests tea made from the hot water produced by fuel cells. The theoretical energy output of the fuel cell is high, but over half of the potential is lost in heat.

More recently portable versions have emerged. The most promising miniature fuel cell is the direct methanol fuel cell (DMFC). DMFC is inexpensive, convenient, does not require pressurised hydrogen gas and provides a reasonably good electrochemical performance. Current systems produce 900 Wh of power and offer an energy density of 102 Wh/l. This means that they are still large in size compared to an electrochemical battery. To compensate for its bulky physics, the charging is made convenient by allowing fuel cartage replacement. Like fuelling a car, this allows continuous operation. 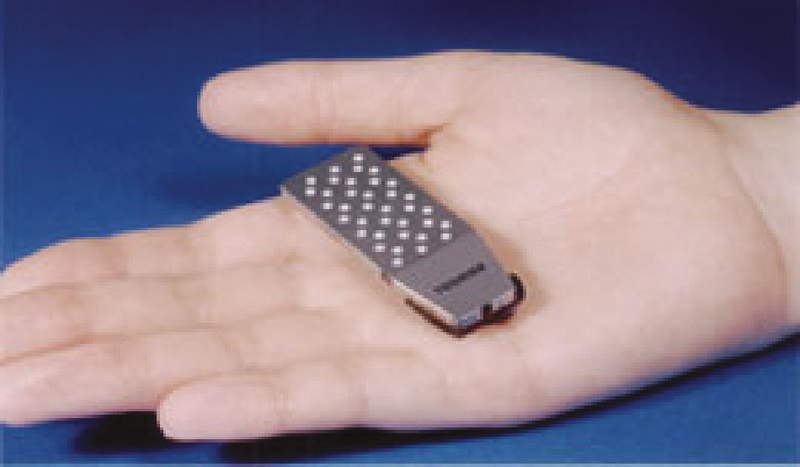 Toshiba unveiled a prototype fuel cell for a laptop, but described the technology as being in its ‘infancy’. The company gave no indication as to when the product would be commercially available. A direct battery replacement that offers high power, small size and competitive price is still several years away. Figure 2 shows a DMFC by Toshiba. The micro fuel cell on the left is capable of providing 300mW of continuous power. The fuel is 99.5% pure methanol stored in a 10ml tank. The refuelling process is shown on the right. 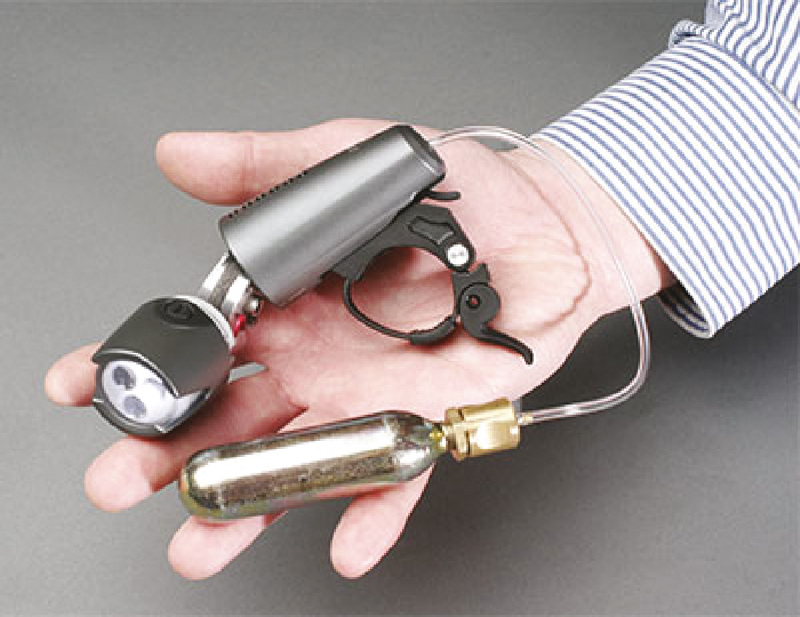 Angstrom Power is developing a portable fuel cell that runs on stored hydrogen and oxygen from the air; the system operates at ambient temperatures and has no pump or fan. The advantage of pure hydrogen over methanol is increased efficiency and smaller size. The aim is to offer a power source that is clean and quiet and can be refuelled on the fly. Figure 3 illustrates an application as a bicycle lamp.

According to Angstrom Power the micro hydrogen™ lamps have delivered good performance in winter and spring conditions “and the user feedback is positive”. The hydrogen fuel is stored in a 21cc cartridge, providing the equivalent energy of about ten AA disposable alkaline batteries. The only by-product is water vapour. A full cartridge provides about 20 hours of continuous operation and refuelling takes a few minutes. 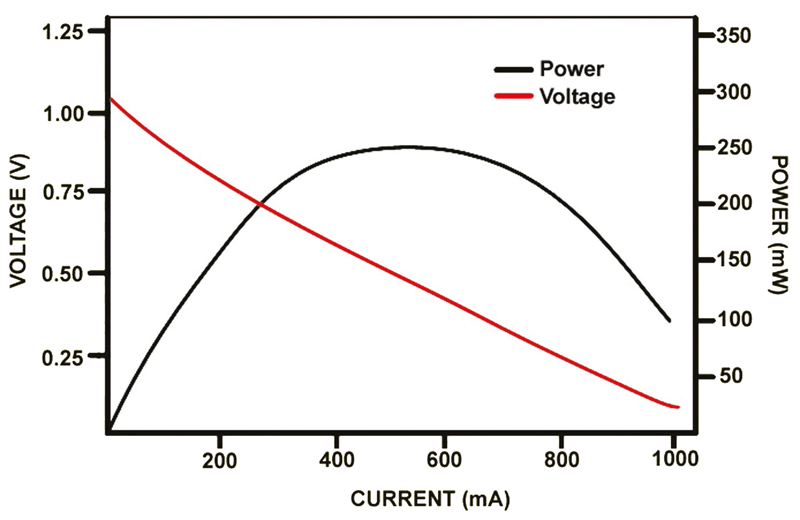 As good as the fuel cell may look from the outside, 15 years of experiments has not solved a number of persistent problems. One is the slow start-up; another is the low electrochemical activity at the anode. This is especially apparent with the DMFC. Each cell produces about one volt, and when loaded the relatively high internal resistance causes the voltage to drop quickly. Figure 4 illustrates the voltage drop as a function of load current. As can be seen, the power band is quite narrow.

Loading is not critical with a small bicycle lamp, especially when low-drain LED technology is used. A laptop, on the other hand, requires about 40 watts of power and a small fuel cell cannot provide enough output to sustain the demand. The system needs a battery as back-up. In essence the fuel cell becomes a slave to the battery and serves more like a charger. The same applies to a fuel cell-powered cell phones and cameras.

The fuel cell has not seen the same earth-shattering breakthroughs that microelectronics has enjoyed. Moore’s Law doesn’t apply here. The continuing struggle is against low power, large size, premature ageing and high cost. There are also transportation issues that prohibit passengers from bringing fuel onto aircraft, though these rules will probably change in the next two years. The International Civil Aviation Organization’s Dangerous Goods Panel has already established an exclusion to allow the transport and operation of methanol fuel cells on commercial flights. This does not yet apply, however, to stored hydrogen gas.

When examining alternative power sources, the traditional battery starts to look awfully good. It is small, clean, quiet and provides instant power when needed. Similar to the combustion engine in a car, the battery will be hard to replace with something that offers equivalent energy density and is affordable. An inexhaustible fuel cell would be nice, but for now we are beholden to the old-fashioned electrochemical concept called a battery. There are no major developments on the horizon that will change the way we use portable equipment and atomic fusion as a potential portable power source hasn’t entered the race yet.