Even with video presentations, it really isn’t possible to get a proper perspective on new machines unless you see them ‘in the flesh’. Having got the bare bones of the advantages of the CRX lead strip extruder from Doug Clark’s presentation in Berlin, there was a lot more that customers would want to know.

“So why don’t you come over to Motala in Sweden and take a closer look?” they said.

Why Sweden? Let’s fill in a few details. Back in the late 1990s Cominco, as it was then known, began to work with a Swedish company called Sandelin, whose expertise was in the field of cable sheathing. Could cable sheathing extrusion technology be adapted for the purposes of making lead strip for expanded grids?

The cabling extruder operated in the vertical axis, which is not ideal for battery making plants especially when the machine is required to be sunk deep into the floor. It’s taken a couple of years to produce the horizontal alignment and, in the process, Teck Cominco bought the firm it was collaborating with.

If a new component-making technology is to succeed in the market place, it must have some advantages over its competition; and there must be some other benefits as well.

The CRX technology is about saving money – in the amount of lead used in battery grids, and in the amount of energy consumed in making them. It’s also about profiling the lead strip so that thickness and strength can be shifted to where it’s needed, like frames, lugs and current collectors, while the majority of the plate can be kept thin – but not delicate.

Motala is not an easy place to get to, but I was among a number of European battery makers taking a closer look on a very short and dark December day.

With the fairly massive hike in lead prices over the past year and increases in energy costs averaging 50%, the CRX technology is timely. It’s reminiscent of a giant toothpaste tube: hot lead strip is forced out of a variable orifice. But the real beauty of the process is the way the cooling of the extruded metal affects the grain structure. As the metal emerges from the adjustable orifice, jets of water are sprayed onto the emerging strip. Teck Cominco’s team have shown that there is a clear relationship between where the water hits the metal, the speed of the extrusion process and the resultant grain size of the strip. All of this information is being incorporated into the control software so the operator can select a lead strip alloy recipe and leave the machine to run. There is clearly great potential for manufacturers.

Raised above the back end of the machine is a ten-tonne lead pot which gravity feeds into the screw-driven extruder system. The barrel of the machine has an array of cooling pipes feeding it and the extrusion die, which determines the profile, is (for now) a hand-adjusted tool. In a few months the adjustable screws which determine the profile of the lead strip will be driven by servo motors.

The machine is in an advanced prototype form but what really matters, according to Derek Russell and Kenneth Gustavsson, who developed it with Teck Cominco, is how potential customers perceive the product.

The machine has been producing positive and negative strip for manufacturers to perform their own life tests, and this takes time. The claim of course is that the strip output is more homo-genous than that produced by any other process, with no porosity and very low levels of oxygen. For positive strip this should lower the corrosion weight loss, and with the much finer grain size control, grid growth and grain boundary corrosion should be minimised too. 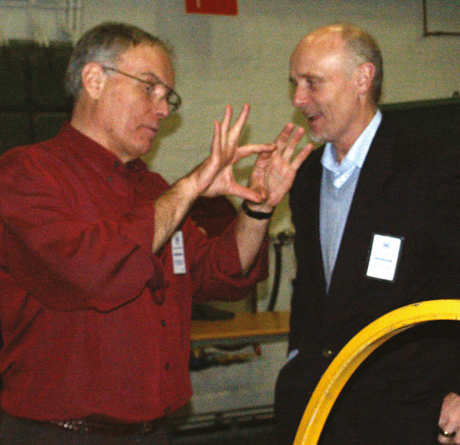 Al Vincze sees the CRX winning market share as a negative plate strip maker because it’s a money saver. If you can take out 10gm of grid mass through the profiling process by making the lugs and borders a standard thickness of between 0.61 and 0.71mm and getting the wires down to 0.41 mm, the payback on investment, with lead still at over $1,000/tonne in early December, could be in as little as a year.

Output from the machine is obviously alloy-dependent. Negative alloy profiled strip is expected to be extruded at speeds up to 75m (245 ft) per minute, or 26,000 lbs of lead in an eight-hour shift. And the machine can operate continuously for at least three weeks without any stoppages for maintenance.

The system still needs an automated coiling system to handle the strip, and Vincze envisages that it should be possible to feed the machine from two lead pots so that it could produce positive and negative strip alternately. But these are hardly massive technical challenges. The big issue for the next few months will be showing a conservative industry that there are new ways of producing a key lead-acid battery component, with improved performance, at a lower price. With lead prices likely to stay high for the foreseeable future and energy costs equally volatile, common sense would suggest that this message should sink in rapidly.